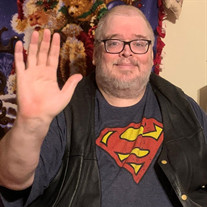 Willard McKinley Thompson Jr was born February 21, 1970, and departed this life on July 11, 2022 after a courageous battle with cancer. He was raised in Blair, WV and resided in Chapmanville, WV. Willard was knowns to many as ‘Little Mac’, ‘Mac’, or ‘Willie’. Willard is the son of Lenna Thompson and the late Willard ‘Mac’ Thompson. He was also the grandson of the late Hillard and Vivian Halcomb and Jessie Willard and Ann Thompson.
Willard was a 1988 graduate from Sharples High School, and he was also the Valedictorian of his class.
Those left to cherish his memory are his loving mother Lenna Thompson of Chapmanville, his sister Teresa (Thomas) McCormick, nieces and nephews, Tabitha (Colton) Farley of Cross Lanes, WV and Tonya McCormick of Chapmanville, aunts and uncles, Margarett (Chester) Chafin of Kentucky, Frances (Chuck) Colins of Tennessee, Ruth (Emmett) Bias of Foster, WV, Emily Casterline/Eldon Chafin of Sharples, WV, cousins, Curtis (Katie) Collins, Sarah (Joe) Kostuch, and Candis Collins all of Pennsylvania, Chester B. (Ann) Chafin of Tennessee, Dale (Annette) Casterline of Florida, and Dewayne (Melanie) Casterline of Six Mile, Danville, WV, a special friend he thought of as a brother Ricky (Traci) Pratt of Ottawa, WV, his dog Joker, and a host of family and friends.
Willard was employed by Southern West Virginia Community and Technical College for 24 years until his retirement in July 2021. He was well known for his computer skills, his big smile, and his contagious laugh.
Willard may be no longer with us in body, but he will forever be present in our hearts and memories. He fought a courageous battle with cancer until his last breath. Willard declared his love for his family and told us that he was okay/good and that he was going to be with his dad and grandparents up to his final breath. He spoke of many different things as his time on Earth was coming to an end but the ones that stand out the most are, “Heaven is beautiful”, “Everything is going to be okay”, “I am running”, “Follow God and do his work”, and most importantly; “I love God! He is so good.”
The family would like to thank everyone for prayers, kind words, texts or calls, and love and support.
A memorial service to honor Willard will be held on Sunday, July 31, 2022, at 2:00pm, Handley Funeral Home in Danville, WV with Johnny Curry officiating.
To order memorial trees or send flowers to the family in memory of Willard McKinley Thompson Jr, please visit our flower store.