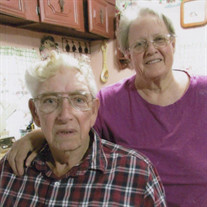 Weldon Ray “Speed” Berry, 89, of Morrisvale met his Saviour face to face on the morning of September 26, 2022. He was born September 17, 1933 to the late Everet and Edna Berry. He was the husband of Patricia Dotson Berry. She had been waiting for him in Heaven for the last five years. He chose to be the dad he didn’t have to be and together they raised five children Bobby, Brenda, Jimmy, Gary, and Mary.

Speed spent his life teaching others the value of hard work and integrity. In fact, he earned his name of “Speed” as a teenager because he was the fastest man on the job. He was a jack of all trades. He had worked in construction, timber, and in the mining industries.

Speed loved people and would do anything to help anyone. He always had a good story for anyone that would listen. He loved to just sit on the porch and visit. He loved his children and grandchildren most of all.

He accepted Jesus as his personal Saviour in September 1993. He then became a member of Maple Hill Missionary Baptist Church. He was a faithful member for many years.

Their souls are reunited in Heaven and their bodies will be reunited on earth, as he will be buried by his wife at Stanley Cemetery, Mud River, WV.
To order memorial trees or send flowers to the family in memory of Weldon Ray Berry, please visit our flower store.