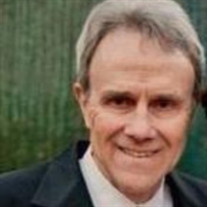 Ronald Dale Lucas, 76, of Ranger, peacefully passed from this life into his heavenly home on September 10, 2022, while surrounded by family at the Emogene Dolin Jones Hospice House in Huntington. He was born May 8, 1946, in Ranger, son of Donald “Tiny” Lucas and Maye Frye Lucas Adkins. In addition to his parents, he was preceded in death by three brothers, Conrad “Jody” Lucas, Gary Michael “Mike” Lucas, and Donald Lucas, and one sister, Tawyana Lucas Fleming. He is survived by the love of his life, his wife of 56 years, Sharon Ann Lucas, one daughter and son in law, Kimberly Lucas Day and Scott Day of Barboursville, and two grandchildren, Natalie and Benjamin Day, who he adored. He is also survived by three precious sisters, Donna Miller of Branchland, Brenda Baker of Ranger, and Phyllis (Harry) Kirk of Ferrellsburg, a special brother and sister in law who loved him like a brother, George and Karen Porter of Branchland, and many nieces, nephews, and friends who will dearly miss him.

Ron graduated from Guyan Valley High School in 1964, and attended Nashville Auto Diesel College. He served in the United States Air Force from 1966-1970, and graduated from Marshall University in 1975 with a bachelors degree in accounting. Ron and Sharon were joint owners of Harts Food Center in Harts, WV. He was a member of the board of directors of Branchland-Midkiff PSD for 30 years, and served as treasurer. After retiring from the grocery business in 2012, he was a dedicated member of VFW Post 6153 Funeral Honor Guard of Chapmanville. He was committed to physical fitness for his entire adult life, participating in several 5K races. Another avocation that was important to him was traveling, and in the ten years after he retired, he had visited all 50 states, China, Thailand, Vietnam, England, France, Central Europe, and the Netherlands. He was especially interested in visiting historic battle sites, and military cemeteries and memorials around the world.

Funeral services will be at 11:00AM on September 15 at McGhee-Handley Funeral Home in West Hamlin, with Alan Frye officiating. Burial will follow at the Donel C. Kinnard Memorial State Veterans Cemetery at Ron’s request. Visitation will be from 6-8PM on September 14 at the funeral home.
To order memorial trees or send flowers to the family in memory of Ronald Dale Lucas, please visit our flower store.