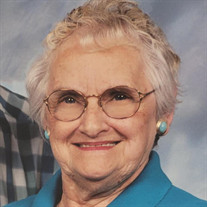 Novillis Marie Cook, 93, went home to be with the Lord on August 5, 2022 at the home of her daughter, Dreama Miller. She was preceded in death by her parents Oder and Rachel Miller; husband Bethel Cook; son Lawrence Cook; grandchildren Russell Elswick and Stacy Jo Elswick; great-grandson Brandon Elswick; and brothers Ezra and Bill Miller.

Novillis was a member of the Gospel Center Tabernacle.

Visitation 6 to 8 p.m. Sunday, August 7 at the funeral home.
To order memorial trees or send flowers to the family in memory of Novillis Marie Cook, please visit our flower store.