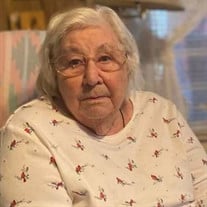 She was born December 27, 1926 a daughter of the late Albert Lovel and Dicie Midkiff Godfrey. In addition to her parents she was also preceded in death by her husband Samuel Cline Clay and brothers and sisters.

Visitation will be one hour prior to service on Thursday.
To order memorial trees or send flowers to the family in memory of Lena Irene Clay, please visit our flower store.