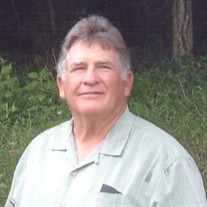 Larry “L.O. O’Dell Adkins age 80 passed on to eternal life on Saturday, May 28, 2022 at his home in West Hamlin, WV.
Larry was born May 15, 1942 to the late Hubert and Ida Adkins. He was a 1961 graduate of Guyan Valley High School Where he loved to play football. Larry was a Vietnam Veteran, retired from Huntington Alloys, where he was a pipefitter. Larry was a 3rd generation deacon; he loved God, Center Point Church, his home West Hamlin, and his family especially his five grandchildren. Larry was thankful to be neighbors for 37 years to his best friends and family Alice and Teddy Triplett. Larry was a devoted and beloved husband father and papaw. He loved going to his grandchildren’s special events.
He is survived by his loving wife of 57 years, Nellie Bell Adkins as well as his three sons and their families; Larry “Dell” his wife Darlene, and children Taylor and Griffin of Barboursville; Matthew and his wife Gina, and children Tyler and Bret of Hiram, GA; Jason and his wife Lois, and child Ava of Barboursville. Larry was so proud of his family whom he adored.
Larry is the second youngest of thirteen siblings, preceded in death by seven brothers, Bethel, Ralph, William “Okie”, Darrell, Rev. Emmitt, Earl and Lawrence Adkins and one sister, Clarine Brewer. He is survived by his brother Don and his two sisters, Nina Hazelett and Ouida Sansom. He is also survived by his brother and one of his closest friends, Hubert "Herb."
Larry led by example, and he and Nellie raised three wonderful sons.
Funeral service will be 11:00 a.m. Wednesday, June 1, 2022 at Center Point Baptist Church, West Hamlin, with Rev. Lenny Romans and Farris Burton, Jr. officiating. Burial will follow at Enon Cemetery, Salt Rock, WV with Military graveside honors by American Legion Post 111 of Hamlin.
Visitation will be from 6 to 8 p.m. Tuesday at the church. In lieu of flowers, contributions to the Center Point Church or a charity of your choice would be appreciated.
McGhee Handley Funeral Home, West Hamlin is assisting the Adkins family.
“I have fought the good fight, I have finished the race, I have kept the faith. Now there is in store for me the crown of righteousness, which the Lord, the righteous Judge, will award to me on the that day-and not only to me, but also to all who have longed for his spearing.” Timothy 4:7-8
To order memorial trees or send flowers to the family in memory of Larry "L.O." O'Dell Adkins, please visit our flower store.