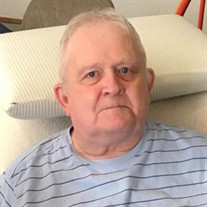 Jerry T. Weaver, 77, transitioned into his eternal home, Friday, November 18, 2022. He was the son of Ralph W. and Mayoma (Jarrell) Weaver who preceded him in death, as did his sisters, Patty Culp, Janet Weaver, and Sally Price.
He is survived by his wife of 58 years, Priscilla Holstein Weaver; his daughters, Melanie (Gordon) Harvey and Melinda (Thomas) Marcum; five grandchildren, Jonathan (Laina) Harvey, Anna (Colton) Hammond, Caleb (Laura) Harvey, Chase (Sierra) Starkey, and Gabriel Marcum; ten great-grandchildren, Bethany, Hope, Isabella, Liam, Colt, Blake, Emma, Silas, Ben, and Hallie Jo; brother, Terry (Alta) Weaver; and many extended family members.
Jerry worked as a coal miner from 1964 until his catastrophic stroke in 2002. His exemplary work ethic earned him the respect of those who worked over him, with him, and for him in his careers from entry-level miner to superintendent of Harris #1 in Bald Knob, WV. He dedicated many years to his company’s award winning mine rescue team. His hard work touched every aspect of his life to the benefit of so many he encountered over the years. He had the heart of a giver and his generosity extended to his family, his church, Christian Faith Academy, and even strangers.
Jerry was the best jokester around and loved to pull pranks on others. He could tell tall tales and loved to embellish his stories, yet he was always a man of integrity. He was a great provider, well respected, and loved his family.
Jerry’s family is rejoicing that he is no longer suffering but is walking with breath and life in heaven now. They would like to express their gratitude to his dedicated caregivers, Kenneth Coleman (deceased), and Kathleen Bailey. We would also like to say a special thanks to his friend, Fred Starkey, who faithfully visited Jerry weekly for more than twenty years.
Above all, Jerry’s daughters want to acknowledge that their Dad would not have survived these last two decades without the selfless sacrifices and loving care their Mom gave him all these years.
Service will be 11 a.m. Tuesday, November 22, 2022 at Handley Funeral Home in Danville, WV with Chuck Ballard and Danny Holstein officiating. Burial will follow in Danville Memorial Park on Indian Grave Road in Danville, WV.
Visitation will be from 6 p.m. to 8 p.m. on Monday, November 21 at the funeral home.
To order memorial trees or send flowers to the family in memory of Jerry T. Weaver, please visit our flower store.