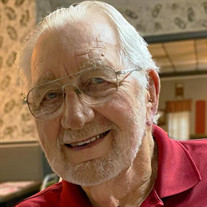 Harry Franklin Hunter, 89, of Millwood, W.Va. (formerly of Chapmanville, W.Va.) passed away peacefully and entered his eternal rest on Tuesday, July 19, 2022 with his family at his side.

Born January 30, 1933, in Greenview, W.Va., he was the son of the late Ramie Lawrence Hunter and Zelma Baisden Hunter. He was a 1950 graduate of Scott High School, Madison, W.Va.

A United States Air Force veteran serving as a communications specialist during the Korean Conflict, Harry continued his military service with the U.S. Army Reserves following his honorable discharge from the Air Force. His military experience provided the foundation for his career working with C&P Telephone Co. back in his home state of West Virginia. Starting as a lineman and working his way into management positions over the years, Harry and his family called the Huntington and Wheeling area home before settling in Chapmanville and the Logan County community in the early 1970s, where he would lead C&P's Telephone's regional operations in the Logan area until his retirement in 1984.

Harry took advantage of his early retirement to enjoy the things he loved the most. First and foremost on that long list was relishing every moment spent with his bride, Barbara, and his family; spending time with friends; cherishing fellowship and time spent with his church family; serving his community; fishing, golfing and enjoying the outdoors; traveling and storytelling; and, playing music and singing with his siblings and extended family.

Harry dedicated his time to service and charitable work in his community through his long association with organizations such as the Kiwanis Club of Chapmanville, Easter Seals, Chapmanville Little League, and the West Virginia Telephone Pioneers. One of the greatest impacts Harry had on his community was through his long involvement with scouting, where he was a respected leader and mentor to the hundreds of youth he worked with each year at Camp Chief Logan and in the Buckskin Council of the Boy Scouts of America. He was a past recipient of the Boy Scouts Silver Beaver Award, the highest recognition a local Council can bestow upon volunteer leaders.

In addition to his parents, he was preceded in death by his brothers Henry (Mary) and Herschel "Doc" Hunter; sister Roberta (Harley) Harbison; brothers-in-law Leonard (Virginia), Lewis (Vivian), Emmitt (Ethel) and Gene Carrier; sisters-in-law Opal Foster and Carolyn Hunter; and his great-grandson Dakota Benjamin Greathouse. He was immediately followed in death a few hours after his passing by his baby sister, Virginia Sue Maison.

In lieu of flowers, memorial contributions may be made in Harry's name to support The Christian Church (Disciples of Christ) in WV All Saints Fund or The Tad Fitzsimmons Youth Ministry Fund, c/o Christian Church (DoC) in West Virginia Regional Office, 1402 Washington Ave., Parkersburg, WV, 26101 or online at www.christianchurchinwv.org/ways-to-give

A registry is available at www.handleyfh.com
To order memorial trees or send flowers to the family in memory of Harry Franklin Hunter, please visit our flower store.