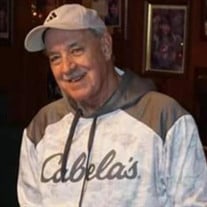 Harold Dean Green, 77, of Foster, West Virginia, passed away on November 18, 2022 after a courageous battle with cancer. He was born on November 28, 1944 to the late Hobert and Enola Green. In 1962, he moved to Washington D.C. where he began working at the Interstate Commerce Commission under the Kennedy Administration from 1962 through 1965. He met his wife, Ginger, while working in Washington D.C. and they were married there on August 24, 1963. In 1965, they moved to West Virginia where Harold accepted a job as a Mine Accountant for Eastern Associated Coal Corporation/Peabody Coal Company where he worked for 35 years before retiring in 2000.

Harold’s family and friends meant the world to him and for all who knew and loved him, he left a lasting impression. He was known as a “helper” for always offering help and guidance to his family, friends, church, community and even strangers, no matter the need. He was also very humble and kind and loved being around people and enjoying life to the fullest, even on his worst days. If you ever met Harold, you undoubtedly have a funny story that comes to mind when you think of him as he was naïve in many ways which added a genuine honesty to his sense of humor. His character and personality truly made him unforgettable to everyone who had the privilege of knowing him. He never met a stranger.

Some of his favorite hobbies included traveling to his cabin in Durbin, West Virginia with his son and their friends, dancing with his wife, Ginger, playing cards and dominoes with friends and spending quality time with his family.

He was preceded in death by his loving parents, Hobert and Enola Green; his three older sisters, Winoma McNeely, Louella Lowe and Georgia Adkins; his niece, Dawn Ann Bryant; and his beloved granddaughter, Lindsey Nicole Paul.

There will be a memorial service on Monday, November 21, 2022 at 2:00 p.m. at Madison United Methodist Church in Madison, West Virginia with pastors, Rick Swearengin and Nathan Epling officiating. Friends may arrive at 12:00 p.m. and the burial will follow at Danville Memorial Park in Danville, West Virginia.

In lieu of flowers, the family requests that donations be made to Madison United Methodist Church. The family would also like to extend their deepest gratitude to Melanie, Libby and the Hubbard Hospice House and its staff for their unwavering care and compassion. Throughout his illness, Harold kept a positive attitude, never complained, and would often say that he was a “winner” either way. He fought his battle with grace and dignity and wanted everyone to know that, in his final days, he was at peace and ready for his journey home.
To order memorial trees or send flowers to the family in memory of Harold Dean Green, please visit our flower store.