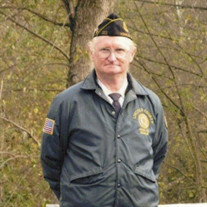 Everett Dean Jr. ,74, of West Hamlin, WV entered the Heavenly Gates of Heaven at home surrounded by his family after a short illness on December 18, 2022.

A visitation will be from 6pm to 8pm Thursday at the church. McGhee-Handley Funeral Home of West Hamlin is assisting the family.
To order memorial trees or send flowers to the family in memory of Everett Dean, Jr., please visit our flower store.