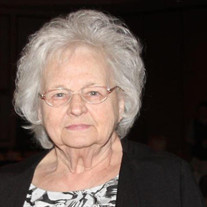 Dorothy Adkins was born on June 25, 1931, at home in the head of Blackberry, Kentucky. After raising her family on Pigeon Creek, WV; Dorothy resided her last 14 years at Six mile, WV. Dot was called for Angel duty in Heaven 10 days shy of her 91st birthday. There to be greeted by her husband Dennis Adkins and daughter Cathy Simpkins who proceeded her. Dorothy was a devout Christian all of her life and enjoyed reading her bible through several times each year. Quilting, canning, crocheting, and making her infamous apple pie’s and dumplings went from necessities in her life to hobbies that she thoroughly enjoyed.

Dot or “Granny” as most affectionately called her was proceeded in death by her parents, Kern and Nancy Hatfield, Brothers Charles, Conard, Paul Dean, Terry, Carl (Bud), and Anderson Dee. She is survived by her brother Tom Hatfield and sisters, Helen Dotson, Lucille (Bob) Pauley, Pauline Stewart, and Rita Ann (Don) Meadows. A family of 12 children survived the great depression, rode horses for groceries, and made their dresses and clothes from feed/flour sacks. They all became strong representatives of the Hatfield family name of which they cherish.

Her legacy lives on thru her family, children Kenny and Chris Adkins, as well as what she referred to as her daughters, Trena and Cindy. Likewise, Rick Simpkins, Jeff and Rob Perry were always thought of as sons as well. Seven grandchildren, Tracy (Jason) Jones, Jeremy Adkins, Deidre Doll, Amanda Adkins, Brandon Adkins, Kierstin Adkins, and Hunter Adkins as well as, eight great-grandchildren. A host of others will always have a lasting impression made upon them from their interactions and conversations with her about GOD.

Funeral arrangements are Saturday, June 18th with visitation starting at 10:00 a.m. and services at 11:00 a.m. at Handley Funeral Home. Dorothy will receive grave side rites and internment at Muncy Valley Old Regular Baptist, Pie WV at 1:30 on Saturday of which she was a founding member of. Services will be officiated by Danny Gilfilen and Tom Ellis. Pall Bearers include Hunter Adkins, Jeff Perry, Rob Perry, Rick Simpkins, Michael Zutaut, Jeremy Adkins.

“Surely Goodness and Mercy shall follow me all the days of my life: and I will dwell in the House of the LORD forever”
To order memorial trees or send flowers to the family in memory of Dorothy Adkins, please visit our flower store.