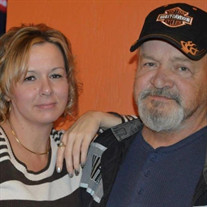 On Tuesday, November 1, 2022 God sent his Angels to carry Glen to his Eternal Home in Heaven, leaving behind his earthly house of clay.

He was born on Friday May 23, 1947 in Montgomery WV to the late Carl and Juanita (Nutter) Jarvis. He was preceded in death by his beloved daughter, Samantha Ann Welch, his sister, Carletta Sue Jarvis, and his niece, Monica Brooks Odom.

Glen was a 1965 graduate from Van High School where he was known by his friends as 'Slick' and still called that by many. Shortly after graduation Glen married his High School Sweetheart, Lana Turner, and they left WV to find employment in Ohio. There he worked for several factories and lastly with the N&W Railroad as a Fireman. After a few years they moved back to WV and he began work at the new Harris #1 Mine and continued there for 30+ years.

He had many interests over the years but, his greatest joys were Preaching and Teaching God's Word and spending time with his family. His fondest memories are of the times spent in the mountains with his wife and young kids gathering 'muchies' , digging ginseng and arrowheads, and teaching his Sons to hunt.
He dedicated his life to the Lord on Sunday, September 28, 1975 and later became an ordained Minister, he was Pastor at several area Churches and delivered Sermons in several States. He helped establish Bible Baptist Church in Kopperston WV, and was the Pastor there for many years, this was the Church his children grew up in, making life long friends, it held precious memories for him and his family. He was blessed by Bible Baptist Church with an extended trip to the Holy Land in 1981 where he visited Israel, Italy, Greece, Turkey and Egypt. The highlights of his trip were being asked to deliver a sermon on Mars Hill, which he did without hesitation, and spending his Birthday in Rome Italy. No words could express how thankful he was for this trip.

Several years later he joined Calvin Evans on a Missionary Trip to Jamaica where again he was able to share the good news of Jesus Christ.

HIs love of music he had his whole life led him to be in the HS Band, and later he would have friends in the backyard Gazebo during the summer evenings jamming, either entertaining the neighbors or annoying them with all their singing and musical instruments blaring out bluegrass gospel music, and a bit of old time country. What a wonderful time they enjoyed.

He was President of UMWA Local 1503 for several years, and also held other offices over the years. He was a NAUI Scuba Instructor. He boxed in the Golden Gloves during High School so it was no surprise when he joined USA Boxing and became a Referee and Judge, traveling to events in Kentucky, Ohio, and WV. One trip took him to Little Rock Arkansas for the National Golden Gloves Championship, and from there to College Park Maryland for the Junior Olympics Boxing where he was in the ring as a referee and also judging the bouts at both events. His first Motorcycle was an Indian which he bought while they lived in Ohio and the love of riding began. He set a goal to visit all the lower 48 States and accomplished that on his Harley, making a 27 day ride through the upper US and down to the final State on his list, California. He and Lana made many memories on those trips and are forever thankful to God for the safe journeys they had over the years.

As the years passed by his health declined and he was no longer able to do the duties of Pastor or enjoy life as he did before. He missed spending the 4th of July with his Aunt Joan and cousins in Ohio and often mentioned how he was ready for Home, his Heavenly Home. He didn't want to leave us but, we know he is where he has wanted to be for quite some time. One day we will be re-united in Heaven.

A memorial service will be held on Monday, November 7, 2022 at Handley Funeral Home, Danville WV. Visitation will be from 6pm -7pm with the service beginning at 7pm with Pastor Joe Lane officiating.
The family wishes to thank all our wonderful neighbors and friends for their love and support during the past months, it has been a blessing and humbled us to know you care, may God Bless all of you richly!

If you are unable to attend the service, you can watch the service at this link:
https://youtu.be/DKTUPUf6GHQ
To order memorial trees or send flowers to the family in memory of Carlos Glen Jarvis Jr., please visit our flower store.