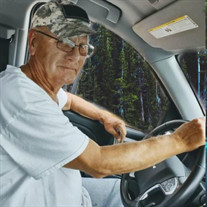 Camden Everett Hager, 74, of Quinland, WV passed away August 18, 2022. He was born September 21, 1948 in Sharples WV to the late Camden Jefferson Hager and the late Louise Williams Hager. In addition to his parents he was preceded in death by his infant sister Diane Hager, sister Nancy Jones of Logan WV, and brothers Rickey and Mickey Hager of Whitesville WV.

Everett was a Vietnam veteran stationed and serving in Germany from 1966 to 1968. He was the last of the “Old School” coal miners. He spent 46 years of his life running coal for Massy Energy/Alpha Natural Resources. Everett was truly dedicated to the mining industry and absolutely loved his job and was exemplary at it. Any time his name was mentioned and someone who previously worked with him was around it was always the same stories about what a hard worker he was, what a good miner he was and how they learned so much from him. If you were a hard worker you had his respect. He had absolutely no tolerance for laziness whether at work nor at home. Everett was known to be a fixer. If there was a mines with problems he was sent to fix it and he did just that. There probably aren’t enough trains left in the state to haul all the coal that Big E or “Dick” as some knew him, ran out of the hills of West Virginia. Even though the results of that career stole his life through the sufferings of Black Lung he told us he loved it and would do it all again. He truly missed mining every day of his retirement.

Everett was an avid hunter and fisherman. He loved spending time on the New River with his son, daughters and grandchildren and four wheeling in the WV mountains. There was not a one of us kids he didn't take hunting (even the girls) or scare to death with his bad boating skills! Dad dreamed of having a hunting camp and place for him, his wife Jeanette and children to enjoy. He loved holiday time and having all his children come home for dinner that Jeanette slaved over to feed us all. Unfortunately by retirement time his body was pretty much used up from mining and those dreams were replaced with hospital visits.

Everett spent his last days readying his home to make sure his wife would be safe and comfortable. That's love. Every time you stopped in, he was working on another project because he knew his health was declining quickly.

In Everetts last days he found so much solitude in his Church at Quinland Baptist. He never wanted to miss a service. He was overwhelmed by the love and care shown to him by his neighbors and community. It was truly a blessing the way they all came out to help and support.

One thing we all know is that there is most certainly black pepper in Heaven or dad would've been back home by now.

Visitation will be from 10 a.m. until service time at the funeral home.