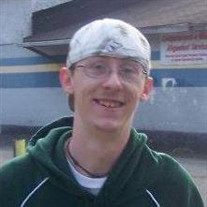 He was born Tuesday, December 29, 1987 in Charleston, West Virginia to Danny Richard Ferrell and the late Venus Roseann Miller.

Brad loved fishing and spending time hunting with his dad and friends. He enjoyed joking around and wrestling with his nephews. Brad found a career he excelled at as a Shop Technician at Quality Mine Control.

Visitation will be one hour prior to the service.
To order memorial trees or send flowers to the family in memory of Bradley Aaron Ferrell, please visit our flower store.