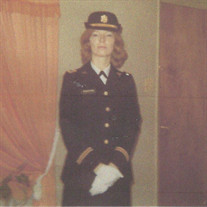 She was the daughter of the late Walter Lee Bradford and Monnie Custis Bradford of Hadlock, Virginia.

Barbara graduated from Northampton High School in 1965 and from Petersburg General Hospital, via William & Mary College, in 1968 with her lifelong friend Pat Brown Diem. She served for two years as Lt. Bradford in the United States Army stationed out of Fort Lee during the Vietnam War era. Barbara also nursed for the Veterans Administration, Northampton Hospital in Nassawadox, VA, Appalachian Regional Hospital in Man, WV and for 31 years at Boone Memorial Hospital in Madison, WV.

She was preceded in death by her parents; her niece, Sara Bradford; and her brother-in-law, Neil C. Parker and niece, Madison Parker.

Barbara is survived by her husband and their children, the lights of her life, Steven B. Parker (Arminda), Amanda P. DeFede (Michael), Christopher D. Parker (Jessica), and by seven grandchildren; Alina and Alex Parker; Mariella, Christiana and Lily DeFede; and Charlotte and Nolan Parker. She is also survived by her cherished brother and sister-in-law, Wayne and Judy Bradford and her niece Katie Bradford. Barbara deeply loved her Parker brothers-in-law and sisters-in-law: Glenn and Pam; Bennie and Vivian; Keith; and “GP” and Deb, plus each and every niece and nephew and their children.

She was married at Hollies Baptist Church, her home church, on June 28, 1975. She was a member of Madison United Methodist Church and lived her life as Christ would have her live it all of her days. Her grandchildren enjoyed singing at a candlelit “Happy Birthday Jesus” cake every Christmas. Barbara was a child of the ocean and left her footprints on many beaches with her husband, but none more so than on the beach of Assateague Island, Virginia. Her many friends should know how deeply she cared for them, their long phone calls and how she yearned to continue to say “Good Morning”.

Funeral service will be 11 a.m. Saturday, November 19, 2022 at Handley Funeral Home in Danville, WV with Pastor Nathan Epling officiating with visitation 10 a.m. until service time. Immediately following the service there will be a dinner for the family at Madison United Methodist Church in Madison, WV.

Burial will be at Hillcrest Cemetery, White Sulpher Springs, WV on Sunday, November 20, 2022 at 1:00 p.m. with military graveside rites.
To order memorial trees or send flowers to the family in memory of Barbara Bradford Parker, please visit our flower store.