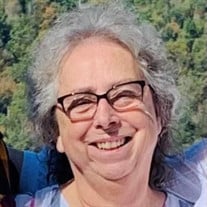 Barbara Anne Harless, age 74, was reunited in Heaven with the love of her life , the late Dallas Ray Harless on October 9, 2022, having succumbed to glioblastoma; a type of primary brain cancer. She was born the fifth of ten siblings to Opal Marie McNeely and Martin Luther Gunnoe on September 4, 1948 in Bob White, WV.

Barbara devoted her life to caring for others. She attended Van High School but was unable to graduate with her class. Instead, she took on the role of mother to her younger brothers Wilburn Ranny and William Robert Gunnoe. She spent the next six decades loving them as her own.

Barbara married her one true love Dallas on September 6, 1969. They made their home in Cazy, WV. Soon after, they welcomed a daughter and a son. Those children are left to mourn her loss: Valerie Shawn and husband Kevin Jividen of Sumerco, WV, in whose home Barbara received care until her death; and Eric Shannon and wife Lisa Harless of Cazy.

Also left behind are her special brothers Wilburn and wife Dinah of Wilkesville, OH and Robert and partner Betty of Clendenin, WV. Other survivors are Emma Jean and husband Ocil Frye of Logan, WV; Willis Gunnoe; and Chuck (Sabrina) Gunnoe; and many nieces and nephews.

Cherished brothers and sisters that left before her are Cledith Lay Gunnoe, Richard Ray Gunnoe, Edith May Philips and Martin Raymond Gunnoe.

Barbara adored her grandchildren. Likewise, they will miss her greatly. They are Gabriel Luke Myers and Julianna Leigh Jividen of Sumerco, WV; Korey Allen Jividen of Dallas, TX; Kelsie Lynn and husband Brent McCrum of Kingwood, WV along with their daughters Maisie Layne and Adrian Paige; and Braydon Ray Harless of Cazy, WV.

After Barbara moved in with her daughter and son-in-law in April this year following her diagnosis, an unexpected friendship developed. Her daughter’s mother-in-law, Irene Jividen, who had already lived in the home for a year and a half, became Barbara’s guardian angel. Although both of them received, and Irene will continue to receive hospice care, Irene always put her own needs aside to make sure Barbara was comfortable.

The family wishes to thank Kanawha Hospice Care, specifically Melanie, Libby, Tiffany, and Pete. We are thankful that we’ll continue to see you each week until Irene is called home.

It was Barbara’s wish that instead of sending flowers, please consider donating to the charity of your choice.

A graveside service will be held at 1 p.m. on Wednesday, October 12 at Memory Gardens on Low Gap Road, Madison, WV with Wilburn Gunnoe and Robert Gunnoe officiating.

Handley Funeral Home in Danville is assisting the family.
To order memorial trees or send flowers to the family in memory of Barbara Anne Harless, please visit our flower store.